meanwhile, back in New Orleans...

Sorry to leave you standing in the airport like that, especially with things being as hairy as they were and all. Now, where were we?  Oh yes, we had just arrived at the check out counter at the airport… 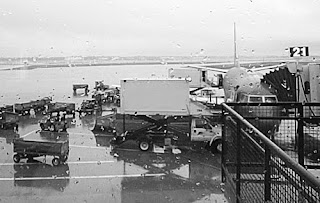 The woman at the counter told us we could try and get through security and take our chances at the gates but she wasn’t showing anything available. She suggested we just wait and fly out Sunday night, using the tickets we already had.

Nope, not happening! I had already turned in the rental car and we were not leaving that airport unless it was on a plane, hopefully that night. Found two flights leaving that night with a few seat possibilites because the people hadn’t checked in yet. They would let us stand there and if the other passengers didn’t show before they closed the door, we could have the seats. Many, many other people were doing the same thing.

Picture it, Mom standing guard at one gate while I hovered impatiently at another. Both of us poised, ready to bolt to the other’s post if the call came. Back and forth we waited, the urgency was palpable, the crowds growing thicker by the moment. Just as I was about to give up on my gate, I got the nod for us to board. Mom came running and away we went.  It felt a little like "every man for himself" type of deal and Katrina hadn't even hit yet.

The empty seats?  Well, those poor passengers were stuck in that traffic on the freeway. I will be forever grateful for that traffic jam.

When the images of post Katrina New Orleans started to appear on the news, I was horrified. That could easily have been us. If we had waitied for our Sunday flight, we’d have been in the middle of it - our original flight home never left New Orleans. 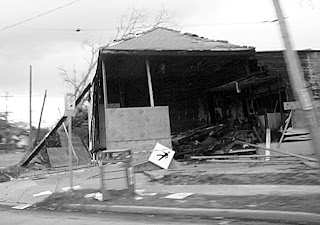 After lots of thought and contemplation, we decided it best that our daughter not return to school in New Orleans.  In December, when they opened the city up on a conditional basis, Andrew Henry and daughter flew back on a “retrieval” mission. They took one day to get a u-haul, load up the “mountain” of belongings and head out of town. 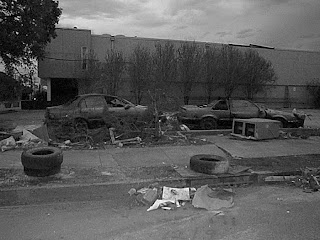 They took these photo's "on the fly" as they drove out of New Orleans.  They said it was eerily quiet, empty, scary and sad, very very sad. 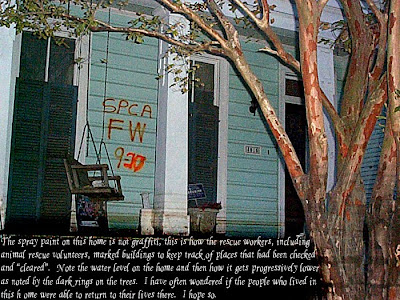 It has been quite a battle for that city. I have great respect for those who went back. For those who rebuilt their homes and their lives and hung in there those first few years when things were pretty tough. This is why I was glad the Saints won that game.  Congratulations to the New Orleans Saints!
Posted by jeanette from everton terrace at 4:41 AM

I've found myself looking forward to your stories. What a monumental time in our history. I guess I'm glad the Saints won also. Until next year (Superbowl that is). http://www.etsy.com/shop/RockinJ9designs

Thanks Jeanine. I means so much to have even one person say that. I decided this was just a place for me to go and be creative and if nobody reads it, well that would be okay, but it seems extra special to share.

That was a tough time indeed for the city of New Orleans. It's remarkable that the NFL team who almost left the city after that storm just won the big one! Good for them.

It's nice to hear a story of luck about that time. Cheerful way to start my day!

The celebration of the Saints' Superbowl win looked fantastic, nice for the city to have something to celebrate.
Must mosey along to your Etsy shop and have a browse!

I am always cheered by stories of what rises from the dust - once it has cleared - even if, in this case, it was the mud. LOVE this blog spot!
I too am heading over to Etsy!