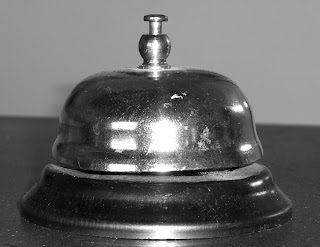 Contrary to the fact that I took second place in our school Spelling Bee in the 8th grade, I am not a very good speller. Spell check helps but mostly I have to rely on synonyms. Replacing a word with one I know I can spell is my modus operandi.

Imagine if you will - our imaginary student panicking because the moderator tells him his word, and for one brief moment he is certain that word is not part of his native tongue. Desperate for more time, and in the hope it will come to him in some miraculous vision our student asks “can you use the word in a sentence?” He listens to the sentence……nothing. His chance of victory is fading. He queries “can you give me the definition?” but still no sign of his muse. Then, after an agonizing silence and the realization he has NO IDEA how to spell the word, he says “can I have a new word?” You don't get another word in a spelling bee. Synonyms are not an option.

Our bewildered student proceeds to give the seemingly foreign word his best shot. His best shot falls short. You know what happens next? They ding a bell. Yep, you hear that bell ding, you hang your head in shame and you exit stage left. Game over.


I know about the "ding" because last night we attended my niece’s spelling bee (that's her below with her award). This was not her school spelling bee, no sir – she already won that one. This was a regional bee. Big league here folks. Pressure time. My sweet little 11 year old niece was competing against 13 and 14 year olds and some of these mental athletes were SERIOUS. 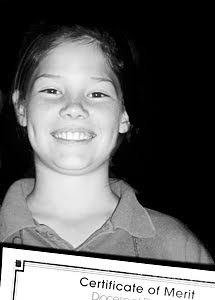 When she was given the word "synthesizer" I held my breath…….(those dots are me holding my breath) good news - she spelled it correctly. The joy that gave me overshadowed the empathy I felt when she got her ding of the bell. It breaks your heart. It really does.

What’s that? You’re wondering why she heard the dreaded "ding". Here’s a hint, she will never forget the word “chrism” has an “h” in it. I know this because I’ve never forgotten the word “library” is not spelled “librairy”.
Posted by jeanette from everton terrace at 2:56 PM

Congrats to your niece, competing with older students couldn't have been easy. It seems that the shorter the word the trickier it can be and just as you have never forgotten how to spell library, your niece will probably never again mispell chrism. I would be curious to know just when she might have an occasion to once again need to know how to spell chrism.

I know exactly what you are saying. I've gone to spelling bees before and I could almost see it in the childrens faces that all they really want is a different word to spell! :-)

Remember many years ago spelling aunt as anut!!!! right letters wrong order!. We dont have Spelling Bees competitions as such here in the UK. But I have seen that film about the Spelling Bee competiton and was seriously impressed by the standard. ( am now going to get spellchecker on this in case I have made a spelling mistake that would be truly embarasing...oops embarrassing:)Chris

And can you imagine how hard it is for those of us who were not born here and did not go thru the system from the beginning. I still cannot spell FREIND :) correctly.

Fortunately, just because you can't spell friend, doesn't mean you aren't a great one!