they sure came marching in...

Were you surprised? Did you win a bet? Did you lose a bet? Do you even know what I’m talking about?

Andrew Henry was rooting for Peyton Manning. I only went into the room to check out the commercials. If the Colts had scored another touchdown right there at the end, we would have won $150 in a work pool, so that was the most exciting bit for me. That, and some tortilla chips with guacamole followed with a rocky road ice cream chaser. I have nothing else to say about that.  It shall not be discussed. 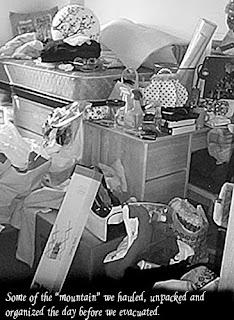 I do have a soft spot for New Orleans so, in the end, I was glad they won. The daughter spent her freshman year of college there. I suppose she would have spent the next three years as well except for that little storm that swept through in 2005. You remember her don’t you? I believe they named her “Katrina”. My mother and I had just spent the day unloading the MOUNTAIN of necessities the daughter “needed” for her sophomore year, when the call to evacuate the city came in.
Daughter had a friend who had just driven in and had yet to unload her car. I told her to hitch a ride out of town with said friend so they could just drive back as soon as the “you can come back now” bell was rung. She threw a few things in her backpack, grabbed her laptop (thank goodness) and was out of there.  No biggy right?

Mom and I went to go gas up the rental car that Saturday afternoon because we had planned a little antiquing the next day before our flight home Sunday evening. Bit of a line at the gas station which left me to look around. The gas station across the street was packed. Our line was getting progressively (and a bit aggressively) longer. A growing sense of urgency to get out began to creep up on me. 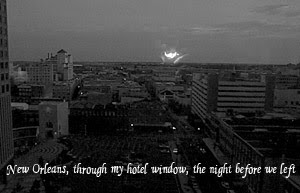 Checked out of the hotel and headed to the airport in the hopes of getting out on an earlier flight. By then, the freeway to the airport was PACKED. Eventually got to the airport, returned the rental car and shuttled over to the terminal. Things were a bit hairy my friends, oh yes, a bit hairy indeed.

To be continued………..
Posted by jeanette from everton terrace at 9:26 AM

How cool to have photos like that just prior to that hurricane. It's almost eerie looking at that calm peaceful shot of the horizon knowing what we know now was just hours away.

I was definitely rooting for The Saints. We lost our signal (cable TV) at halftime, didn't see any of the entertainment, didn't mind that but when the signal was restored it was past the halftime break and both teams had scored more points!! Did mind missing that!!!