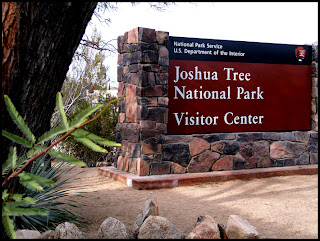 During our Palm Springs trip last month, we visited Joshua Tree National Park.  So many words come to mind in my attempt to describe this place - spiritual, vast, unique, surprising, raw.  It touches your soul.  I don't know what I expected, but it wasn't that.
I mean, I knew there would be Joshua Trees, obviously, but dear oh dear, I didn't know there would be so many.  I was also surprised by the rock formations.  They were everywhere, odd structures littering the desert landscape.  It was almost like we were on another planet.  The unnamed, imaginary planet in my head that is. 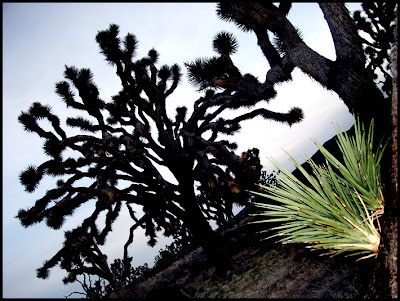 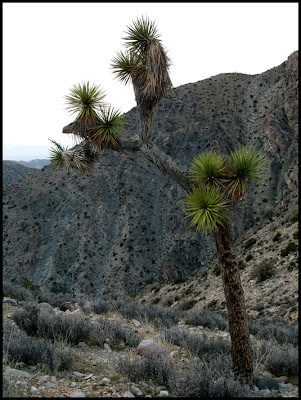 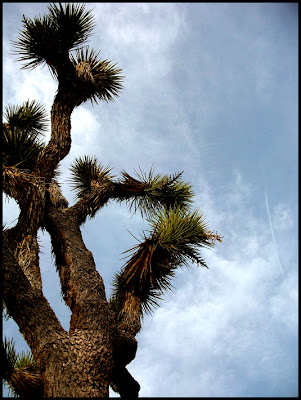 One of the interesting rock formations... 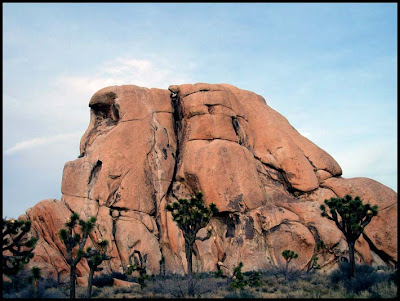 Doesn't it look like Land of the Lost or Lost in Space or something along those lines (references for people over 40)?  Okay, see that little indention up there on the left?  Let's zoom in... 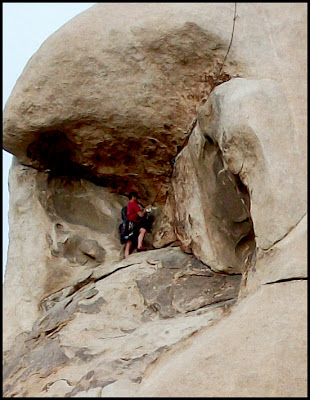 Wildlife!  There were some other rock climbers with this guy, they were on the top, about to rapel down.  No thanks.  I mean, cool yes, but, no thanks.  Speaking of wildlife - come back this afternoon and I'll show you what else we saw...

Posted by jeanette from everton terrace at 3:00 AM

I agree with you completely! It is "spiritual, vast, unique, surprising, raw" and I don't think it could be described any better than Edward Abbey said it. I would really love to visit this place. It reminds me of how I felt the first time we went to Rocky Mountain National Park - I felt very small and my mouth gaped open a lot!
As for "Land of the Lost", really wouldn't be surprised to see a Sleestak come walking out of those cliffs or ole Grumpy to try to stick his nose in there and eat those climbers! Thanks for sharing these awesome photos! Makes me want to pack my bags (oh wait! they still are!)

My sister went there and described it exactly as you have. Her pictures were not nearly as nice!

Ha ha ha Maria, I remember the Sleestaks! I hadn't thought of that in years, too funny.

You guys are great. Andrew Henry and I thought the Joshua Trees LOOKED like Sleestaks and said so when we were there!!!

Yes, it was haunting.

Such a wondrous place! Once again, great photos!

Beautiful. And that Edward Abbey quote is totally going on my book face. Now that you know what that is...

I'm pretty sure I saw a Sleestak...

This place was extraordinary!

Nice job on the zoom-in to the climber. Very cool.

Toes are always okay! Thanks for visiting my blog. I'm following yours now :)

Have a great Tuesday xx
http://hopechella.blogspot.com/