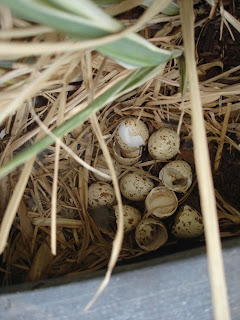 I just wanted to share with you what happend at our house last year on Mother's day.  We had 12 little quail eggs on our front porch.  The Mommy and Daddy quail had been nesting them in our planter.  I was freaking out about how high the planter was above the cement.  I made Andrew Henry put down bubble wrap so when they hatched, they wouldn't get hurt in the fall.

We tried to check on them every day to see if they had hatched.  Didn't want to scare the momma away so we were super clandestine about the whole thing.

We get home late morning on Mother's Day and notice our dog Jake is frozen at the front window.  Jake is a German Shorthair Pointer.  German Shorthair Pointers are bred to hunt quail.  If you can believe this.........they were being born right that minute - right as we walked through the door!  Not one minute sooner.  10 of the 12 eggs hatched and the entire thing lasted only about 10 minutes.  They came out one by one and leapt off the top of the planter, then scurried to find their parents.  They didn't even need the bubble wrap.  Mother nature knows better than I.

Would you like to see a rather poor quality video we took after a few of them had hatched and found their parents?  When I say "poor quality", I mean it.  We were hiding from them and only had our cell phones so this is shot through a sliding glass door, it's a dark and kind of cloak-and-dagger video and it's the only thing we've ever loaded into youtube, but I thought you might like to see it anyway.  It gets better (not much) right at the end when the babies are running away.  They are the most adorable creatures.  Brand New Baby Quail - minutes old

This is one of the two eggs that did not hatch.  Funny thing is, the adult quail waited nearby the entire time the first 10 were born, then they took off.  They knew those other two wouldn't hatch.  Nature is a wonder. 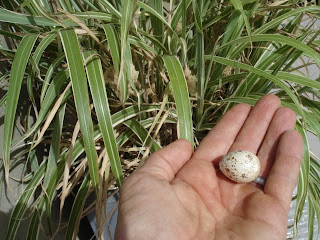 It was the such a lovely mother's day gift last year don't you think?

Come back a little later and smell the flowers...
Posted by jeanette from everton terrace at 3:05 AM

Love it! Love it! Love it! That video NEVER gets old! And my boys sit riveted to it cheering them on over and over! Just precious! Thanks so much - so glad your timing was perfect in arriving home. What a gift!

That is too sweet! I love baby birds, that is truly a gift from nature, orchestrated just for you!

How cute is that?They are the darndest things when they try to cross the road and then at the last second take off because you're a little closer than they are comfortable with.

Whoa - that's so so so cool! I had no idea quail were that tiny when they're born.

How wonderful! I'm sure they waited just for you!

We owe it all to Jake. He was the only one paying enough attention to catch the action!