This is the final part of a story that began on Tuesday - please read the posts from the beginning if you are getting here for the first time.  Start here and scroll up, thanks.

I carefully opened the wad of tissue - 2nd graders pockets are not the cleanest of places.
This is what I found.
A shell... 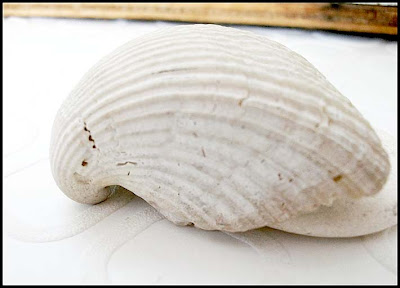 and a baseball card thingy... 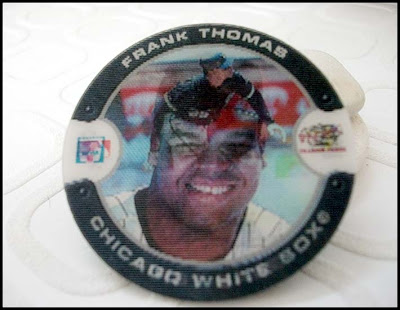 a worn and weathered religous medal... 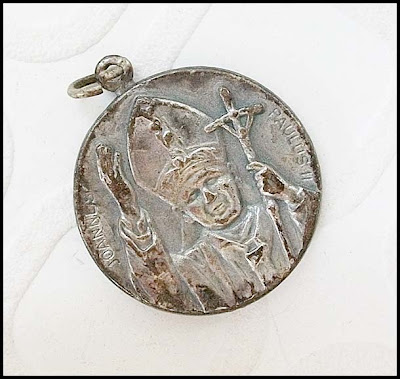 and this little rubber martian fella... 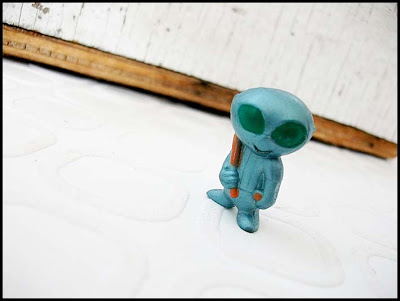 I collapsed in a pool of overwhelming emotions.  It was the most generous gift I have ever received.

I was surrounded by dozens of roses and boxes of the best chocolates, gift cards and elegance which I greatly appreciated.  Just because people have the money to buy things doesn't mean they have to.  Money does not equal generosity and thoughtfullness.  So many families took time out of their busy lives to think of me, to go out and make the effort to purchase, wrap and bring me a gift and don't think I didn't appreciate that because I really did.  It's just that Max had nothing to give and nobody to help him but he wanted to bring me something.  Poor Max thought he had nothing to offer, how wrong he was.  He possibly gave almost all he had.

Max waited until everyone was gone to pull out that wad of tissue.  I can't stand the thought that he might have been embarrassed at it's lackluster appearance.  Still, he found the courage to give it to me, he left the classroom but then turned and came back in.  I imagined him looking through his room and collecting these things for me.  Were they his treasures?  Did he have anything left?  Where did he get that shell?  Did he have other baseball thingys?  Who had given him the medallion and what of the martian?  I bawled my freakin' eyes out.

This little collection of things is very special to me and even after all the moves and the major purging when we decided to become more "minimal", they are here.  They will always be here with me. 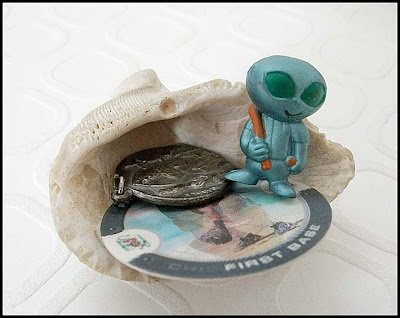 I am certain those children don't remember me.  Why would some lady who was their 2nd grade teacher for only a few short months cross the mind of a teenager?  I don't know if I will always remember them and truthfully most of their names (though not their faces) escape me now, except Max.

Nope, not Max.
Max I will always remember.
The life I was trying to make a difference in.
I thought I was ready for him.
I was not.
Posted by jeanette from everton terrace at 2:00 AM

I am sure Max and a lot of other students remember you... you sound like you were an amazing teacher, one who really cared. xo

Oh, I love this story!! How incredibly sweet and thoughtful. And I love that you still have all of these little trinkets :)

I will never forget one of my teachers. I had her for gr 6 and again gr 8... I was thrilled. She knew how much I loved horses and as a child she had a horse too. One day after school she asked me to stay behind for a few minutes and gave me a box filled with all her old horse books from childhood! I treasured this for many, many years.

Then in my older age, I passed these books along to my students (as an equestrian coach). I also used to work at a school :) There are some students that I remember because they were so precious to me.

I have also happened to run into my old teacher who of course recognized me. And a few of my old students too (from coaching and from school). I always feel so honored when they remember me and light up when they see me... you know, as opposed to cringing, lol!

PS To answer your question, I am from Germany.

This brought tears to my eyes.

Me too Willow, me too.

Oh, Jeanette, how touching. I am truly moved. That's how change comes, through one kind gesture to another.

What an amazing gift. I really hope max is doing well. What a sweetheart.

Lovely, lovely story. I know those feelings so well. I have treasures from a select few that I taught who touched my life so deeply over the years - they are safely stored away - and I take them out every now and again and relive those memories. What a blessing you have shared with us. My boys would die for that Martian and the baseball "thingy". I hope Max has continued to shine that light into others' lives!

OK, that is so cool. I think of my sons pockets and what I find in them. If he went thru his room to find something for his teacher, what would he come out with? One of them could possibly be a tie-dye silly band in the shape of a dinosour. Another might be his shiney little turtle he carries for good luck. One thing I know he'll have in his hand when he walks out will be a bead. He loves them and has a collection of them. When we visit bead stores they give him a plastic container and he picks up every stray bead he finds. It's his mission to be in the prone position spotting lost little particles.

ok I'm sitting at work trying to fight back tears! And that so gave me goosebumps!

OMG Jeanette, I have chills.
I love love love this story so much!
I've always thought that the rewards of teaching were priceless and you have proved that beyond measure.
Thank you for sharing this most precious memory with us. I too adore teachers and have always felt that what they sorely lacked in pay was offset by the incredible impact and memories that they carry for a lifetime. You are an amazing woman and I've been dying to get over here and thank you for all the love and kindness you've shown me these past months. You are an angel and I am so grateful to know you through blogging. I'm hoping one day you might come visit me and we will go shelling and treasure hunting together!
So much love to you this day, Jeanette.
XO

Jeanette that was quite possibly the sweetest story I have ever read. His generosity is heartwarming yet heartbreaking. I am now bawling my eyes out. So sweet. so very sweet.

Great story J!
I am sure that some of the students remember you!

Oh my gosh, now you've got *me* all tearing up! I would carry those with me across every move too. I wonder how Max is these days. I bet he remembers you.

Well done! I wish everyone could see a picture of Max's little face. It's been quite a few years but even I still remember Max.

I remember his little face too. I hope someone was kind to Max along the way, because he deserves it.

Awww, as a teacher myself, this story rings near and dear to my heart. Believe me your students always remember you. Just recently, i was in the supermarket and i heard s string of hello Mrs Blake. It was a couple of my former students who were so excited to see me and the feeling was mutual. Once a teacher, always a teacher:-) xx

He loved you! Proven by his 'gift', not so much what the items were but because he wanted to give you a birthday present. I hope the rest of his school years have been good to him. He will never forget you!

that is the cutest story i've heard... and definitely those gifts are the hardest to part from...

What a sweet story--so profound, especially for teachers. I often think the same thing about my students--"they won't remember me!"--but then I think about how many of my teachers I remember so vividly, and it makes me think about it differently.

I can't imagine teaching at a school like the one you described, and how it must feel for a disadvantaged kid to be there among all the wealthy kids. I bet I have one or two students--total--who don't get free lunches. Some of them told me last week that there had been days they couldn't get to school because they literally didn't have bus fare. Amazing! Puts life into quite a perspective.

Awww, I'm just finding your for the first time, and this story is just so touching!

Sooooo, sweet. Beautifully written. Oh, and I'm betting that Max remembers you too!

I love this story. I didn't end up being a teacher, but I always thought that was the one sure-fire way I could be famous - make a difference and someone will remember you forever.

that was better and more meaningful than anything i could of imagined. he brought you all the things that meant most to him. my son has similar things that he treasures like these, so i know that these were his prized posessions. wow. yes, keep those and make sure your children know the story so when you pass it down to them they get it. those are keepers. ☺♥