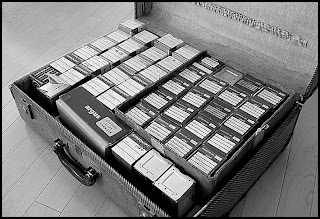 As I try to squeeze in a few minutes here and there to climb the mountain that is Christmas preparation, I am reminded of what I was doing this time last year.

This suitcase is full of slides taken by Andrew Henry's father from about 1955 to around 1973.  They are beautiful images of family, friends, weddings, births, holiday's - moments in the lives of many.  I took on the task (at the request of AH) of scanning each of these slides so we could make cd's for his many (many) family members.  It took me about 4-6 hours a day for the better part of three weeks to scan them all but, as with so many things in life, it was worth the effort.

I never had the privilege of meeting AH's father, Jack, as he passed before we met, but in handling each of his slides and seeing things as he saw them, I felt like I got to know him a little bit.  A nostalgic look back... 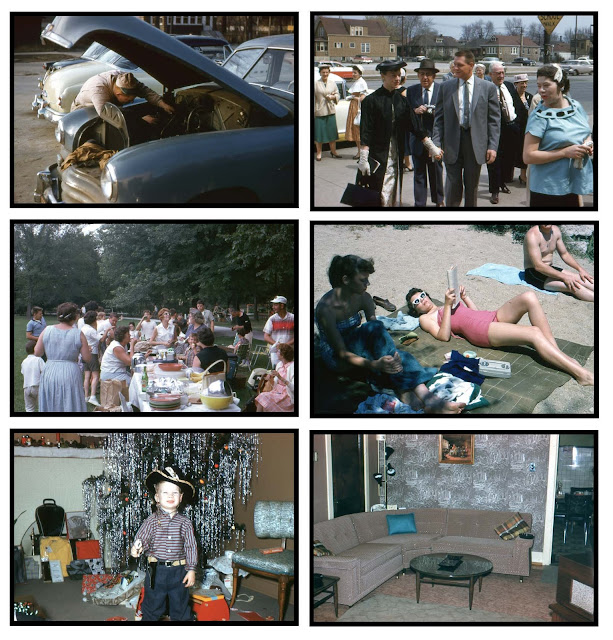 At the time, I was annoyed at how much time it was taking to get this job done and wondering why it had fallen on me to do it - silly girl I was.  It was an honor to preserve something so special to Andrew Henry's father (an AH of course), those darn blessings - why do they sometimes have to be so well disguised?

I'm adding the scanner info because I've had a few inquiries.  I scanned them at home with an Epson V300PHOTO scanner.  This has worked great for us - you can scan slides or prints straight to your computer.  There are many out there but this is what we bought, I found it easy to use and it has more than paid for itself.  Found one on Amazon if you're interested - you can check it out here.
Posted by jeanette from everton terrace at 3:04 AM

Ohh that is beautiful:) My Balazs did a similar project a few years ago about his grandparents. He never met them but he wanted to create a website full of memories about them for the other generations:) I loved reading this post, sweetie. Hugs and kisses

A labor of love, indeed.

I have boxes of carousels of slides from this same time period that I inherited when my grandfather passed away a few years back. I need to invest in a scanner. Can you recommend one?

How WONDERFUL! I love them all - but my faves are the car and that cowboy (AH?)!

Funny how the most difficult things in our lives most often turn out to be the biggest blessings. God's sense of humor maybe. I have learned along the way that the things I work hardest for or put the most "labors of love" into are the things that I cherish most. Fine example you have here.

Memories and classic images - what a wonderful job you did to preserve them all!
Cathy

Ha, nope AH is not old enough for that 50's shot, that's one of his cousins. The car shot is great, there were many of the mid-century gas station, very cool.

What treasures you have recovered.
I bet the rest of the family willl be thrilled.
Something so haunting and fascinating about delving into the past.....
riches indeed

Wow, I love looking at old photos! I did an old slide show of photos of my grandfather for his visitation a few weeks ago.

Love the fashions in the first pic!
That living room shot could almost be of a room of today!
Great pics and the viewing of all those slides you scanned last year was so wonderful!

How absolutely beautiful that you got to handle this project. I also never got to meet my significant other's father (who passed away before we met), but he passed on a similar treasure trove of family slides and we've yet to scan them all. I'm so inspired by your tremendous labor of love!

They are truly incredible, and such a unique way to get to know your parents.

It's a wonderful snapshot of another era, to see these wonderful slides. I took a selection of my parents' slides and made a photo album for them for Christmas; I did not dare convert all of them; I wonder how you did this by yourself, or did you have to send them out?? We still have boxes and boxes and they really should be seen. Thanks for the wonderful idea and for sharing the slides...

Wow how cool are those pictures!?

I should have said the fashions in the second pic!

Wow Jeanette...nice photos..great way to view the old days and get vintage inspiration. I’d love to scan all my old slides from the 70’s ...

An amazing gift that fell in the lap of the perfect person!!!
What a bond between you and the spirit of your Father-in-law.
Just beautiful!!!!!
xx

You should Cynthia and when you do, I hope you'll share them on your blog!

Wow! What lovely pictures! They look like they were taken yesterday because of the sharp colour it still has. Have a wonderful day, Kellie xx

WOW, first, that had to take FOREVER...I get so impatient scanning one thing, haha! But also, it definitely sounds like it was so worth it - that is so cool :) :)
Also, you have a box full of vintage scarves? oh gosh, you should sell them, they would go like hot cakes!

How very special and wonderful that you got a peek into the father in law you never had the privilege of getting to know. xo

I was particuarly interested in the 'gloves-and-hat' shot as we're putting on a play set in the 1950s and that gives me an idea of how ladies dressed back then. (I was well and truly alive but I've forgotten.)

These are seriously incredible! I can understand that it was kind of a burdon placed on you but it must have been so neat to look through those and get to know his family that much more. So cool!

That is so lovely. And thanks for the info on the scanner! I need a better one!

First, that scanner is a great one because the photos look awesome! Old photos are such beautiful treasures too and remind us of how important family is! Since i've been packing, i've come across dozens of old pics(which inevitably slows down the packing process) because i have to go through them and go down memory lane...XX

You did a fantastic job with this labor of love. It was a marathon effort for sure. There were thousands!
There is a certainly peace of mind knowing we have been able to share these pictures with the rest of the family and they won't just be lost in an old suitcase.

what a treasure. troy did that for us with family video / photos.
what a very mod room in that last shot!

OH MY!!!! When people document their life, it is perfect. This is incredible. So sweet! xxxx

How lovely! I can imagine it was amazing to go through them all and to see life captured back then. It's great that you enjoyed the task in the end. A blessing in disguise for sure!

Not sure if my previous comment came through so putting it in again. The pics are fantastic like still shots from my favourite tv show Mad Men. I love that Don Draper he maybe a louse but hes yummy like scouse!!!