My father grew up in Wisconsin and my mother grew up in England.  They met in Germany, married in Phoenix, AZ and now live in Sedona, AZ.  In between they had some kids, dogs, cats, grandkids and lots of anniversaries.  Saturday they had another one, anniversary that is.

We only have one photo of their wedding day and it's from outside the church.  Andrew Henry decided it would be neat to take a photo of them in the same spot on their anniversary for a "then and now" - so that's exactly what we did.


How cute are they? 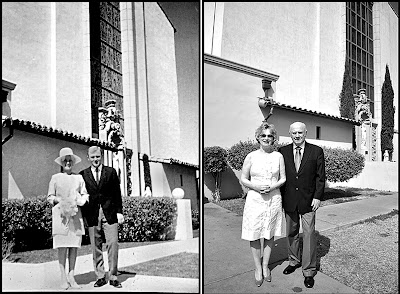 I know I know, we should have put my Mom in a hat and given her some flowers but honestly we didn't think of it until we were on our way there.  It was just a quick thing we did before brunch, perhaps we can try again next year.  Fun fact, that church, though not in our neighborhood and not one we belong to, is where my daughter's high school graduation ceremony took place.  Oh the circles of life...
Posted by jeanette from everton terrace at 2:13 AM

Labels: then and now, wedding anniversary

The circles of life indeed...love these flashbacks! I've missed visiting you so much too! Happy Tuesday my friend. XX

That is such a fantastic idea and you should totally frame both of those photos for them. They look so lovely:) Happy Tuesday, my dear

So sweet. I love the before and after! We celebrated my on laws 40th anniversary this weekend.

What a sweet and truly touching post...loved this!

They haven't changed a bit. What a handsome couple. Happy Anniversary.

How interesting! And I love recreating photos! I have a few photos of my grandparents I would love to recreate some day. There is one of my grandmother in front of the flat where she and my grandfather lived in the early years of their marriage. It's here in San Francisco and I've been to it. Just haven't gotten around to it. This is really sweet. Happy anniversary to your parents!

What lovely photos.
I don't mind that your Mum doesn't have a hat or flowers, it looks likes a wonderful "today" photo.
And yes, they are so cute !

Love this! I would have never thought to recreate that moment, but it is a lovely pairing!

Oh I love how you took their photo in the same spot! That's fabulous!

It was a good idea! We wouldn't have thought to do it.

awwww that is the sweetest thing ever!!!!

what a great idea! The look just as gorgeous now as they did back then :)

They're beautiful, then and now.

They are darling
and still as cute
and chic as they
were on the BIG DAY!
Happy Day,
xx Suzanne

You know how I love the before and after shots! I think this turned out great!

I LOVE this! Such a great idea, that Andrew Henry ;) Congratulations to everyone on that anniversary!

Just live this - they are simply charming! And look just as happy to be together as in the original shot!!

so wonderful! thanks for sharing!

So cute- just like the Back to the future photography series- I love it- Happy Anniversary to your parents.

aw so sweet - best wishes to the lovely couple :)

What a lovely idea that is - and what a photo to treasure for all of you.

You don't even know how much I love this!!!! I love then and nows!! they are perfect. Happy Anniversary to them!

OH how I LOVE this!
Two of my very favorite people - looking ever so Mah-vah-lous!
Happy, Happy Anniversary you two!
I love the B4 and Afters too AH!

Love those circles! And a happy way to celebrate their anniversary.
xo Cathy

Jeanette how wonderful, they look so happy together. A very special memory!

Something luscious for your face..

Thank you all for good wishes!

what a hoot! they have not changed at all. your brother sure looks like your dad! happy anniversary to them!

I've said it before, I'll say it again - that Andrew Henry is a gem!

Great idea to celebrate these two most precious people in your life and their enduring relationship with each other.