My husband always goes to the auction with me.  He mostly walks around looking at things, researching prices on his phone for me or hauls things back to the car as I bid away.  He's not there to buy, he's just my moral support.  I don't think he has ever bid on anything, well, until last weekend.  There was an amazing clock collection up for auction, at least 50-60 pieces I'd say, and Andrew Henry was quite taken with several.  Most of the clocks he liked went for higher than he was willing to go and some other lucky bidders took them home.

All except these two.

From the feet on this, I'm thinking mid-century.  It chimes, which I like, but Andrew Henry hasn't quite taken to yet... 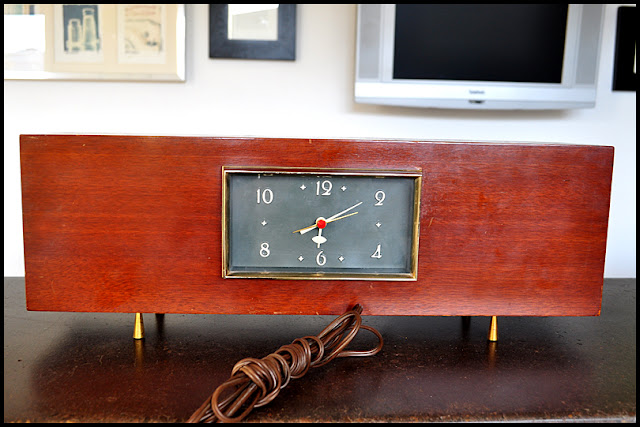 This next clock is called a Jefferson Golden Secret clock by Roger Russell and was made in 1956.
Mid-century modern at its finest. 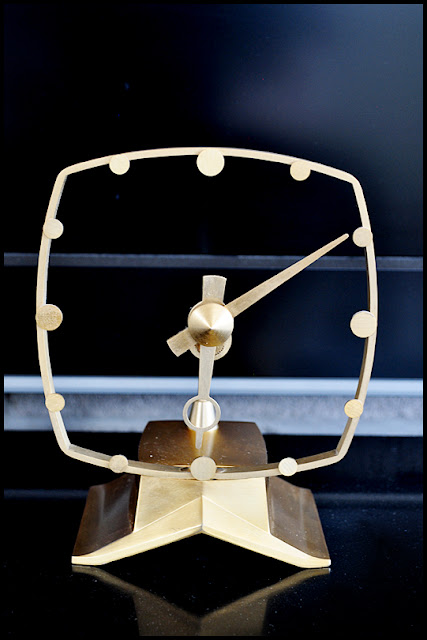 Now this one we might have to keep.
You can read a little about it here, if you're interested.

Those are the two pieces Andrew Henry bid on and won at the auction.

Good morning! How lovely to meet you and thank you so much for coming to my post to leave a comment. I so love seeing new people come by!

I REMEMBER THESE SORTS OF CLOCKS IN MY CHILDHOOD HOME!!!!!!!!!

Have FUN collecting and sharing! Happy mothers' day as well and may your daughter's dreams always bring her sweet memories of YOU!

nice you have a partner in crime :)

I really love that second one, never seen anything like it--keep it!

So much fun !
I thought he bid on some very convoluted mechanical farm or car part but his choices are even better.
Both clocks are wonderful but the first one is a classic. I would buy it in a second even though I have no room for it. Beautiful.

What a fun and exciting day you both had.

Yes, I was weak. They were too cool looking. Especially the second one. I really hope it keeps good time because I want to hang onto it for a long time. What a cool design!

Those a wonderful pieces...I've always wanted to go to an auction!

yes, that Jefferson Golden would not be leaving my house...that is a keeper!
xo Cathy

The Roger Russell is my fave and I would definitely think a 'keeper'.