She had just graduated from college and was excited about moving to Seattle to begin law school.
That graduation ceremony was utter misery.  SO SO hot, well over 100, it was outside and it took hours.  President Obama gave the speech, so the stadium was packed.  There were secret service men walking on the roof of the stadium and I thought that was kind of cool.  Seriously, look at all those people... 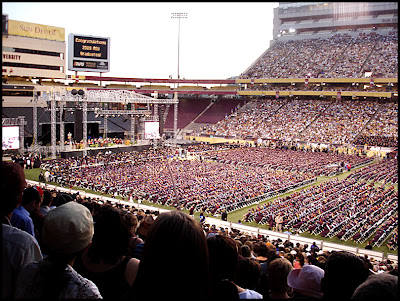 Misery I tell you.

This time, for her law school graduation, it was very different.  There were only 180 graduates, it was inside and it was out of state.  We kept it very low key, brunch before and ice cream after.  Different but nice.

I was thinking about the shindig we threw three years ago, after that giant heat furnace graduation.
We moved all the furniture out of the living room, rented tables and chairs etc., the colors were pink/green and we had a candy favor bar - such fun.  Thought you might enjoy taking a peek, because who doesn't love a party? 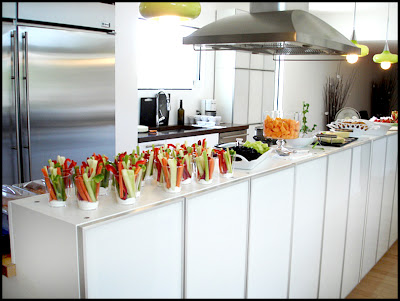 Those cups with the veggies sticks and dip in the bottom were genius - don't remember where I saw the idea but I'll be using it again.  Also fun were those caprese salad skewers.


and my favorite - the drink station... 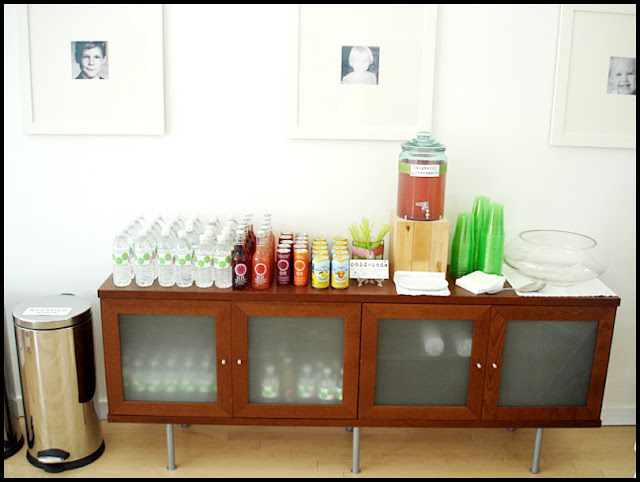 That Ikea piece was perfect.  I put all the extra drinks in the lower cupboards, made for easy restocking.  That glass jar with the raspberry lemonade looks nice but the raspberries kept floating down and blocking the spout.  Drove me nuts.  How do people prevent this?  Yes, I made custom water bottle labels - pink and green circles with her name and congrat's of course.

So, no party this year.
At first I was a little sad when she said she didn't want one but after looking at these photos from the last one, and knowing I'm incapable of a small affair, I'm kind of relieved!
Posted by jeanette from everton terrace at 2:22 AM

My goodness! I'm glad you took that first photo - that's unbelievable! The other photos are a delight-such great memories, and congratulations to your daughter.

It was a great party! Glad to keep it low key this year.

Your daughter is one heck of a lucky girl to have such a loving wonderful and supportive family... Am
Nd now a lawyer ... It all paid off J.. U raised a goodun.
C

Wow, those pictures are impressive. Looking back though, it reminds me - I was exhausted too... :-)

And I thought my graduations were big... WOW!

That party was wonderful! And what an accomplishment, Meg!