My belgian waffle facts: I did not taste a belgian waffle until I was married to Andrew Henry.  I do not like maple syrup.  I have not eaten a belgian waffle since discovering my gluten allergy last September.  Belgium has the lowest proportion of McDonald's restaurants per inhabitant in the developed world.  Oh sorry, that was Belgium the country and we were talking about their waffles.
My friend Pam, of the four lovely women fame, called to tell me about a gluten-free waffle mix she spied at her Trader Joe's (I know, I know, T'J's again).  Pam calls me when she finds new gluten-free products she thinks I might like.  She's good that way, my friend Pam, she is like your very own Sam Spade.  Once she knows you're looking for something, she's all over it.  Last Thursday night (yep, for dinner) I decided to give it a go.

Andrew Henry is the traditionalist.  He likes his waffles with strawberries, whipped cream and maple syrup.  If he's feeling crazy, we put blueberries IN the batter, but it was a weeknight so we stuck with the plain batter.  Don't want to challenge his balance.  I am able to throw in a handful of flax seeds - I do this to almost everything.  I eat mine with pecans in the batter, a little butter and some berries - no maple and no whipped cream.  What I have to tell you is............... 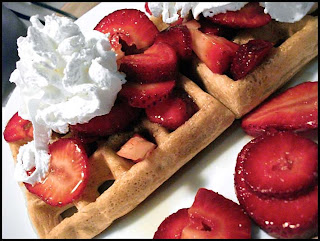 They were glorious!  I don't know how they might taste to those of you who CAN eat gluten.  Andrew Henry said they were good to him.  He didn't know his were gluten-free until I told him.  He just thought I had done something a little different.  I made 8 extra and put them in the freezer - they won't last long.  Next time I think I'll add a little cocoa powder!
How do you like your waffles?
Posted by jeanette from everton terrace at 12:15 PM

Oh man and yum...I started a little "diet" this week and now I'm not so sure..I Want Waffles!!!cream, syrup,butter,pecans all that stuff. Hope you had a lovely weekend with your family...

Not a fan of Belgian waffles. I don't make my own waffles. I keep a box of Homestyle Eggo Frozen Waffles in the freezer for those odd occasions when I feel like eating one, usually for a snack and not breakfast. Just butter for me, no syrup.

A little more whipped cream please and lots of syrup.They should be dripping with all natural huckleberry syrup. Jeanine
www.etsy.com/shop/RockinJ9designs

I never thought to put flax seed in things like this. good idea. I'm going to try these waffles even though I'm not allergic to wheat, sounds good!

OK - on a day to day basis my boys eat Kashi and Van;s waffles (Van's are gluten free) we are not sensitive - but I do believe we can all use a break from overload from time to time. BUT - on the weekends - I whip out the waffle iron - they LOVE it!
We eat them all sorts of different ways - have not limited ourselves to deciding a favorite at all. There are even days when my sweet angels just want them plain - not even cut - just whole in their hand. I am happy to oblige - but think it really funny for two little kids - who could and often do, have them way loaded with sweet stuff to request such a thing. But, like I said, we like them all sorts of ways. Yours look so yummy - it's got me wondering what box I packed that waffle iron in - and maybe I did it a tad too early!

they need chocolate chips. and bananas.

funny you should ask! i make waffles at least twice a month to freeze. i found a good recipe online and modified it with oat bran, wheat bran, whole wheat flour, and butter milk. sometimes i make them with olive oil, otherwise canola. no sugar - use stevia. okay, so i changed the whole recipe! on top i use the agave organic syrup mixed with maple and lots of blueberries / add walnuts to mine since jorja does not care for them. YUM! YUM! i may just try the gluten free tho.

Don't usually like waffles but I'd make an exception for yours. They look wonderful.Last time I waffled was in the U.S. too long ago that I'd like to remember and the waffles were much too sweet for me, made worse by the syrup. I'm a pancake and lemon juice person. In answer to your question, how do I like my waffles? Sorry, but I'd have to answer infrequently.They don't seem to have taken off in poularity in Australia, but then we're addicted to idiotic things like Vegemite on toast.Who can explain that!