The Wednesday morning "Pagoda" series chronicles the almost 5 years we spent turning a Pagoda into our home.

Last week I introduced you to all the creepy crawlies we met along the way.  Now that they've gone on to live (or not) somewhere other than my Pagoda, let's get to some building shall we?

Before we could get going on the house, we had to build the garage.  Needed somewhere to put our "stuff".  We decided to build a separate building.  Our fabulous view is not a 360 degree treat.  Nope.  Pagoda faces the mountain but backs up to a very busy main road here in Phoenix.  The existing garage was at the front of the house, facing the mountain - why would you want to waste the view on your cars right?  We sure didn't.  We built our garage at the back of our lot.  Now that the lot has been cleared - let's put down some forms so we can pour the foundation... 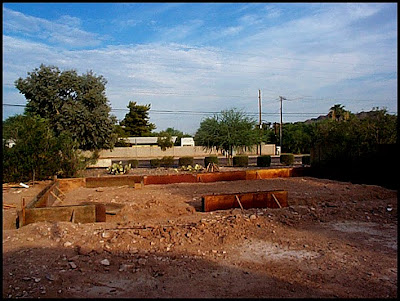 See that busy street back there?  Yes, well it's important to remember if you can see them, they can see you!  Not a very private carnival we lived through.

Forms down, bring on the concrete... 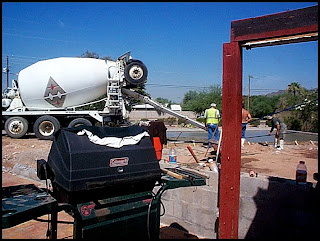 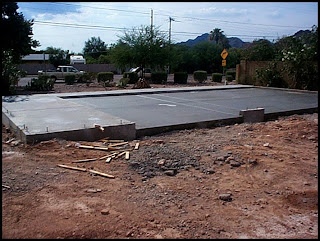 Doesn't it look pretty?  So many possibilites.  Let's put up some walls... 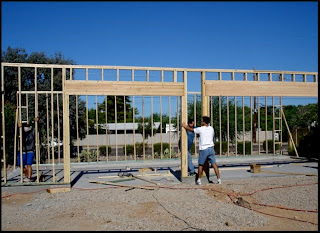 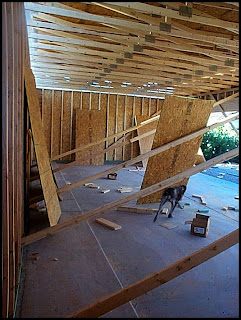 I'm going to pause here for a moment, this next part does not interest me in the least.  I find it boring.  I would, however, be remiss if I didn't show you the electrical work that had to be done inside that framing before the walls could be finished. 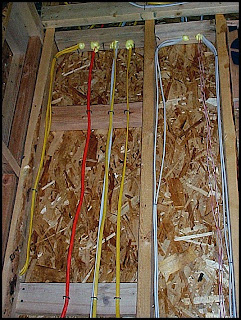 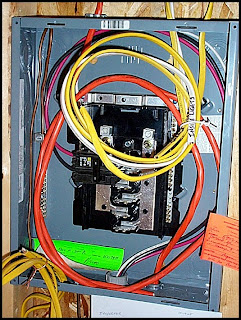 I must show you this because Andrew Henry did this.  He is not an electrician.  His brother showed him how to do it.  He is also not an electricain.  We passed the inspection and it hasn't exploded so it's all good.
After all of this, the foam goes on.  I don't like the foam.  I can't touch things like that.  I cringe at the sight of styrofoam, don't even get me started on cotton - I'm seriously cringing as I type this.  I cannot take it out of a jar of aspirin.  Grabbing a bag of powdered sugar could kill me, but let's move away from my weirdness.
Foam started to bring it to life. 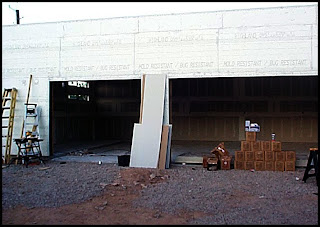 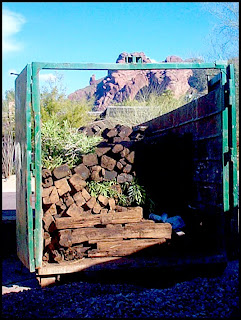 Do you know how heavy a dumpser filled with old railroad ties is?  Ask Andrew Henry, he dug each one up and put them in there.  He's a warrior.  I cannot say that word.  I can type it but I cannot pronounce it correctly.  Warrior, should be simple but for me, it's not.  Again, weird here.

Again, wouldn't you just love to have been my neighbor... 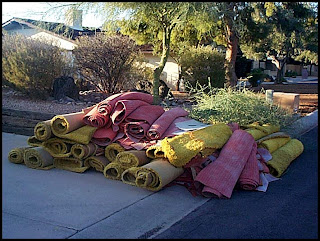 This AH just ripped out and threw on the street.  Funny, I have no idea where it went.  I am recalling now that lovely 1970's yellow shag carpet was also very heavy.  I'm not recalling it because I had anything to do with removing it, I  think he may have mentioned it a time or two on his way out the door.

That's all we have time for today.  You'll have to wait another week to see the rest of the garage.  Trust me, that is 400 million times less time than it took to build it!
Posted by jeanette from everton terrace at 3:00 AM

OMG. This is the GARAGE? It looks like you could fit 10 of my apartments in there. If this is the garage, what is the house going to look like? I was wondering how long those guys had to stand there holding up that wood frame? Cracking myself up thinking about it.

So nice to see that we are coming along. Still can't believe that you LIVED there! AH the Warrior - has a nice ring to it!

With each story I am more convinced that I don't think I could have survived the process, unless perhaps I had lived away from the project and not in it. Looking forward to the next episode!

Whew, just looking at these photos makes me exhausted! You clearly have an enormous reserve of energy - I can imagine going through all that.

As one who has been through the building process, I feel your pain.But, are'nt the pictures great. You almost forget about the metamorphasis from WHAT IN THE WORLD to I WOULD HAVE NEVER THOUGHT !! Good job guys.

That's some view through that dumptster. It must make it all worthwhile. That carpet is something I remember well. It was in my house growing up!

I know we made fun of Andrew Henry for all his photos during the process, but it is pretty amazing looking back at them. And yes, Henley, the garage is awesome. It is probably bigger than my house.

Good Mornng Jeanette Sweetie...
With each passing post I get so excited to see what you are putting up and where it is going next. That is one heck of a BIG garage you have there. I can't wait to see the house. You are very brave sweet friend. I don't think I could live through something this caotic. My hat goes off to you.

Will be anxiously awaiting for the next part of the story. Have a beautiful week sweetie. Country hugs and much love...Sherry

I wish I had documented some of the (small in comparison) remodeling projects we have had over the years. Great pics!

Pay no attention to that red sticker on the electrical service panel...

I wish I was in town for all of this so I could see all the construction going on. I love CONCRETE! haha! now who's the weird one...

Been there too Jeanette, although on a much smaller scale and most of the horror I have succesfully blocked. One thing I can recall with crystal clarity is balancing precariously atop a stepladder, bent forward, with sheets of ceiling across my shoulders while (from a facing stepladder) my partner affixed them to the beams. I'd like to add that I weighed approx. 102lbs and I do believe those ceiling pieces weighed slightly more. It took me 2 days to straighten up properly and 2 years to get over the experience.

as someone who saw the original pagoda... dark and mysteriously purple, gold and a bit 'memoirs of a geisha'- the place the geisha had to run away from - and thought 'this is one of the ugliest homes i have ever seen and who would live here?'
the makeover is EXTREME. such an airy and uber cool place now.
why is the computer underlining uber? doesn't that mean super? anyway it is like a RESORT!!
pdc