The Wednesday morning "Pagoda" series chronicles the almost 5 years we spent turning a 1970's Pagoda house into our home.


We started building the garage in the last Pagoda series.  Let's keep going shall we?  After the electrical went in, we put in drywall and Andrew Henry, the daugther and I, painted the inside of this 800 square foot garage.  The 10' ceilings were a bit tricky. 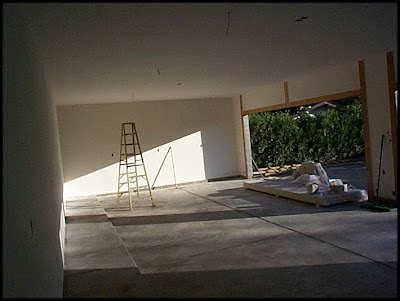 Now the outside needed some stucco.  We did not do the stucco ourselves but, after they crew finished, I had to go outside and hose the whole thing down several times a day for several days so it wouldn't dry too fast.  That was fun.  Phoenix outside in the summer = very unhappy Jeanette. 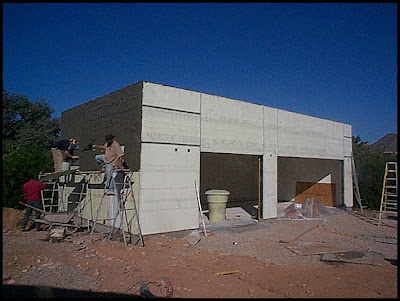 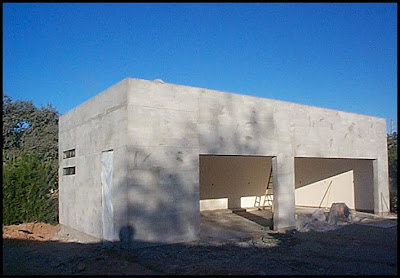 Then Andrew Henry painted the entire thing himself.  Two coats, first a primer then the paint.  Big job for a guy alone but it came out great... 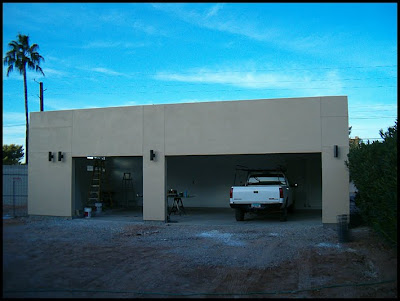 You know the only problem?  Neither of us really liked the color.  Can you believe it?  We spent months picking it out.  I didn't say a word because he worked so hard painting it alone.  I decided to just live with it.  It wasn't that bad, it's just that it wasn't quite right...you know?  A few weeks after he finished, we were out for a bike ride and he mentioned how much he liked the color of a house we rode by and suggested we might change ours to something similar, before he could finish his sentence - I said "oh yes please".  We tried lots of new colors and looked at them in different lighting for weeks. 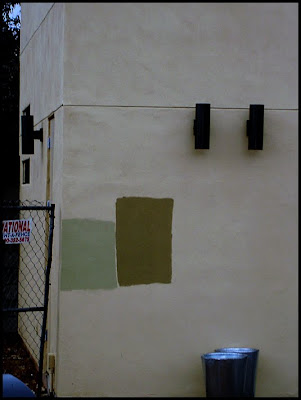 We picked a deepish green deserty color to replace what looked like bleached out yellow to us.  He painted two more coats on the garage (that's 5 times he painted the garage poor fellow).  Then we went off to IKEA and got some cabinets and spent two days putting them together and installing them.  I'm short, the cabinets were tall, it was a challenge.  Picked those lights up at a rummage sale for a few bucks - love that (still gives me a thrill). 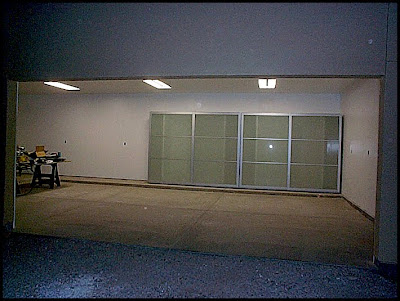 The doors were a custom order that tested our patience to the limits.  Took months to come in and they installed the glass backwards.  More months of me fighting with them, then them finally coming out to fix.  They had to take out each piece of glass individually and turn around and re-install.  I'm thinking they never made that mistake again - it took two men all day long to fix. 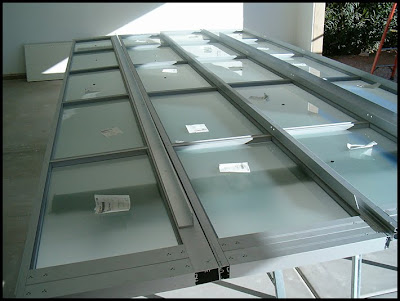 In the end, we love the garage.  It's packed to the rafters now.  It's like a purse, no matter how big or small, you fill it up.  The reason the garage was so important is, it's my view from the kitchen sink and I spend a lot of time there so I wanted to be looking at something I like. 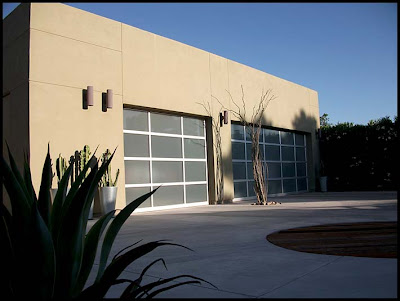 Here's the question today.  Would you have lived with the original color of the garage or dealt with the expense, time and labor to do it all again?
A little later my most recent vintage finds...
Posted by jeanette from everton terrace at 3:00 AM

1st - your garage is as big as my first apartment!

3rd - nope, would have changed the color too (though good on you for being willing to live with it for AH's sake) because, like you said, you had to look at it and live with it every day - it would have been a constant visual disappointment - an if only, or woulda, coulda, shoulda......and that's never any fun!

4th - I think, especially for a garage, it looks fantastic.

Everytime you do a post from this series I'm blown away by your ability to stick it out through all the construction. As someone incredibly lazy, I would Definitely have lived with whatever color it was!

I would have changed the color! While in our previous 2 story home we contracted to have the exterior painted. It was sealed tongue and groove cedar but had weathered in just 10 or so years. I wanted something close to the cedar color and thought I had done a good job of choosing. I was out on errands while the painters were working. When I returned and approached the house I was in shock! They had completed one side and all I could see was 'mustard!' I told them to hold off with the painting, called my husband and told him I couldn't live with the color! We had already paid for all of the paint, it was custom mixed of course so it was 'ours'. I must have sounded so frantic (I am a careful spender), my husband said to have the painters stop altogether and we would choose another color. Thank goodness, I couldn't face driving up to the house for what turned out to be 8 more years in what would have been the 'mustard pot'.

Definately redo. It's empty and there is no better time than the present. I would have left a little patch of the old, framed it in with some cool metal, hung a car charm, and wha-la, garage art!

If AH was painting, I would redo it!

Oh it came out so beautifully! I love it, very chic! Would I have changed the color? Absolutely. You have to live with it every single day, it ought to make you happy. You have a good husband! XO!

what an amazing transformation!!!

I'd change it again if we had to. One long weekend of work to have something you like.

First off - I believe excellent painting skills run in AH's family and that they are all great worker bees. I stopped my AH mid - living room with cathedral ceilings -paint job. My whole being started to feel uncomfortable with the color so he HAD to stop painting and let me get a different color. He repainted it - I was happy - so he was happy.

When my AH first saw this little bungalow that I purchased - without telling or asking him if it was ok (Note to the young girls out there: when you have been married as long as I have and have excellent credit you can do that - just buy a house and tell them later - they'll live!) Sorry - got off subject there - When he eventually saw the house his ONLY concern was the poor condition of the garage. I have no doubt he would repaint it as many times as I requested. In fact - ten years earlier he did make me wait 10 days to move into our new house because he HAD to paint the garage floor. All the men in AH's family love their garages. But -ohhhh - how mine would love AH's garage instead of his vintage 1939 handy-man special.

I think it's worth changing. Especially if you have a willing hubby!

boy that is beautiful!