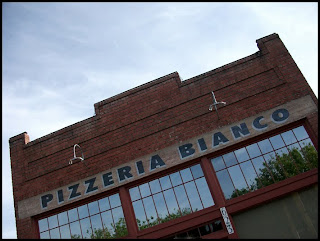 For some of you, I don't need to go any further than the title.  You already know of the heavenly goodness of which I am about to wax poetic.  If, by some slim chance, there are a few of you still unfamilar with our beloved Pizzeria Bianco, then go eat something and come back here to read the rest of this post.  These words/photos should not be devoured on an empty stomach.  I tell you this because I love you.

Pizzeria Bianco is famous.  I'm not talking, just Arizona famous either.  Oprah has talked about it.  Martha Stewart has talked about it and I believe Rachel Ray named it the best Pizza in America.  The foody people of the country have been buzzing about this pizza for years and it's in my little corner of the world!  I would not call myself a big pizza person, even before my allergy to gluten was discovered.  I like pizza, gourmet pizza, I dont like door delivery pizza, no thanks.  Andrew Henry could eat pizza every day.  He doesn't, but he could. 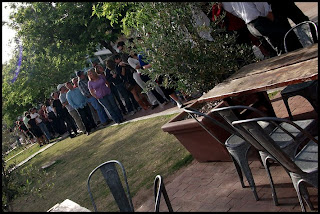 If you've heard that you have to get there hours before they open to wait in line...you've heard right.  If you get there around 2:00 p.m. and wait for the door to open at 5:00 p.m., you will PROBABLY get to sit down right away.  If you get there after about 3:00 p.m., your name will be written down and you will be seated much, much later, hours later.  I was lucky this time.  We visited while the daughter was home over Easter break.  She and our second favorite gal, Maia, went and waited in line for us.  Think they got there around 3:00 p.m.

Look at that photo to your right.   That is the line as it formed behind us!  We joined the daughter and Maia around 4:50 p.m.   We were the last people to get a 5:00 p.m. seating that night and that was only because we agreed to sit at the bar.  The bar is not so comfy people.  Might have been worth the hour or more wait.

Most people hang around outside after they get their name on the list.  They sit at the picnic tables, drinking wine, talking, playing cards (oh that's just US playing the cards).  When the weather is nice, it's no big deal.  I've never gone in the summer.  The food is insanely good, but almost nothing is worth being outside in our summer.  I hardly even leave the house from July-September. 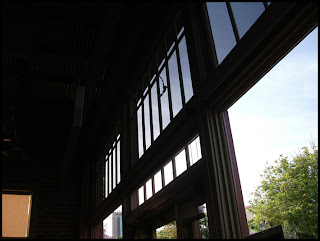 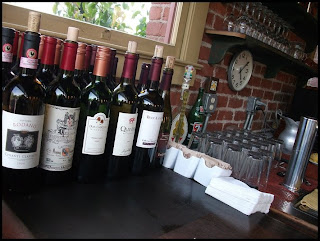 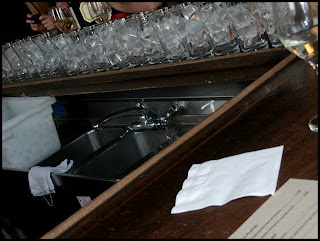 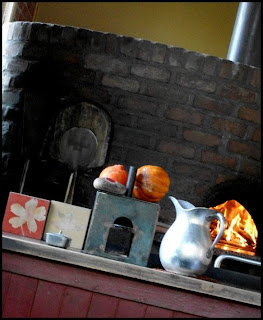 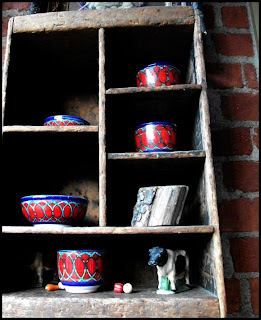 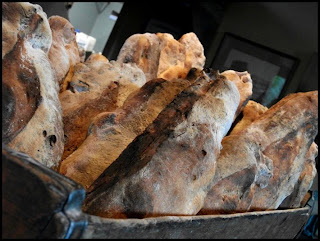 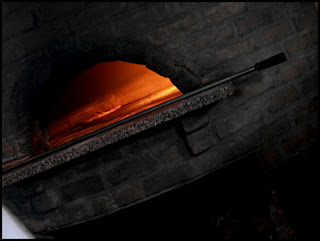 This is where the magic happens.  The stuff that dreams are made of my friends.  There are only a few things I would eat that have gluten in them.  Less than 5 foods on this earth that are worth the sickness I feel later, and the pizza that comes out of that oven is one of those foods.  I actually ordered and ate mostly this... 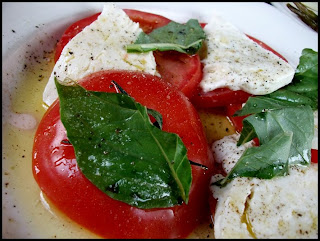 A delicious Caprese Salad, but it was lonely.  It wanted a nice slice of real bread.  Glutenous and lovely bread.  I figured since I was going to get sick anyway, I might as well have at least one of these.  I kept it to only one, but it was hard.  Really hard.  That olive oil is........I can't think of a word but it is............. 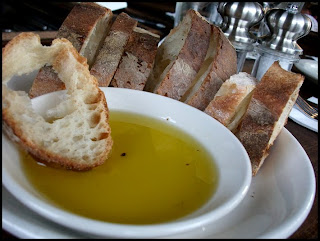 and I drank this because I don't like wine and I like the retroness (word?) of the bottle. 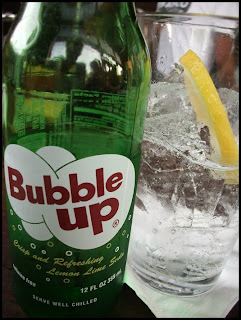 We shared an appetizer that was taste taste tasty and had no gluten... 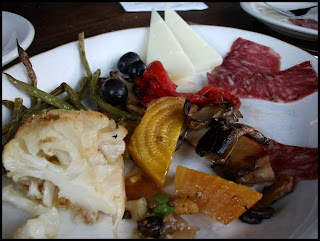 Oh, I'm sorry, did you want to see the PIZZA or something.  I can hear you all out there growling at me.  Simmer down now love.  Here you go.  Feast your eyes on the famous Pizzeria Bianco pizzas.  This is Maia's dish and my least favorite (the parm' is too strong for me) though you gotta love a pizza with pistachios on it right?  I should say, even though I don't love it, I still ate a piece!!! 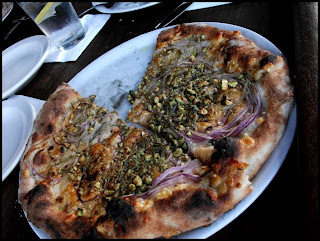 Andrew Henry's pizza.  He thinks it's the only one worth having.  He LOVES this.  He might love this as much as he loves my Banana Cream Pie and that's sayin' something!  Worth mentioning, AH doesn't eat pork.  This pizza has sausage on it.  He suspends this little rule only for this particular dish.  He says it's that good.  I don't eat any meat so I'll take his word for it. 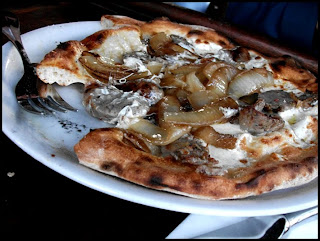 This is the daughter's pizza and as is the case in many, many things, it is also my favorite.  Simple.  It's the best one.  It's worth waiting in line for (but not in the summer). 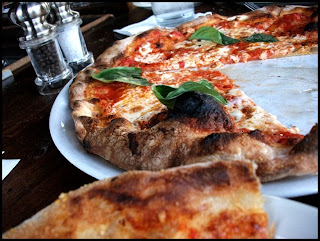 Have you enjoyed our visit to the best pizza place in the country?  I hope so.  We sure did - especially when we got back to our expired parking meter and had no ticket!  Good day. 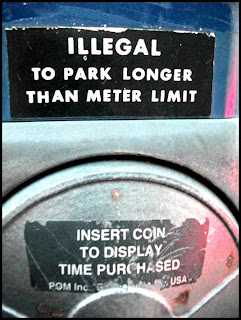 What is your favorite pizza topping?
Posted by jeanette from everton terrace at 11:00 AM

That pizza I had is called the Wiseguy. It's really really good. I love red sauce. It doesn't have any, and it's still ridiculous. yummy!

This post almost makes me want to fly to Arizona! Was your daughter's pizza just a plain cheese? If so, delightful . . . that may have been my pick as well. Looks amazing!

It almost makes it worthless to eat other pizza. Almost.

My sister once accepted a speaking engagement in Phoenix, simply to eat here. She echoed your sentiments exactly. I might be on my way!

Wow to wait in line that long for food...it has got to be good...Loved this Jeanette...you are getting really, really good at this photojournalism stuff! Hey if you ever get a chance go to the flea market at the fair grounds and let me know what you think...I use to drive to Az. just for this flea and do the shops in Glendale and around Phoenix...use to be fab...Maybe I'll drive over!! It would have to be soon though...I am not a heat person...at...all...

I was just wondering what to have for lunch, however nothing in my fridge or cupboards appeals to me at the moment! Will have to wait until this story is just a memory. Don't think any pizza here could hold a candle! YUMMY!

What a place! I like red sauce and veggies and I do like pineapple on my pizza.

OMG. Saw it on Oprah and MS before. Never really had this kind of tour. It looks incredible. I guess if that many people will wait that long, it must be good!

Your ability to capture the very essence of a place is just so ridiculous! This place makes everything else just pale by comparison. I swear girl, jumpin' on a plane - rest the ankle and get your line standing shoes on! Oh - and I AM having the wine!

Oh sweet Maria, if you come for a visit, maybe I would even have a glass of wine to celebrate!

I have eaten there and it is wonderful! Could just eat some of that pizza for dinner!

I have heard about it and I live in Boston! I've been dying to try it, husband LOVES pizza. I heard they won't do take-out, is this true?

Yes Lisa, it is true, no take-out.

Whenever I get my hiney to Arizona, I'll definitely have to check out that pizza joint. Looks amazing and I could almost smell the pizza!
My favorite pizza is pesto pizza with artichokes, sun dried tomatoes, feta and olives. Yummmmmm....

This spot looks amazing..I love anything with feta on top! Hugs for a great week.xox

The pizza is delicious but the bread is also the best in the west. Delicious!