Thought we'd take a break from vintage handbags this week.  I have a little something special to share.  This is my all time, most valuable, blew us away, best deal in the world vintage score - well, for me.

Seven years ago, before we moved to Pagoda, I stopped by an estate sale about a mile from my old house.  The sale was on a property.  An older property (for Phoenix), that had several buildings on it.  I think the sale had been on for a day or so already.  Andrew Henry and the daughter were off on a school sponsored Father/Daughter field trip so I ventured off alone.

I wandered into a barn/garage type building.  There was "art" all over the place.  Framed things, prints, clown paintings, velvet things, a few originals, photographs etc., you get the idea.  I wandered over to a pile in the corner (who doesn't like a corner pile?).  There were frames propped up against the wall, most were covered in cobwebs.  Found an odd looking framed map.  It looked rather old and had, what looked like, colored highlighter lines drawn all over it.  I like maps.  Andrew Henry likes maps.  It was $2.  I bought the map. 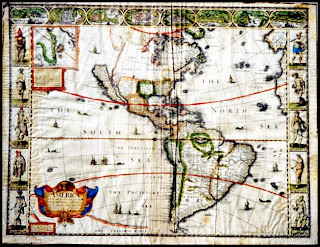 I brought it home.  AH laughed at me.  He didn't like it much so I put it away (meaning I left it on the dining room table).  I couldn't stop thinking about it.  I took it out of the frame.  It looked like it had been in a book or something.  Had a giant fold running down the middle (you can kind of tell from the photo).  It showed California as an island - isn't that fun?

It felt old, you know what I mean?  This is what was printed on the map - "John Speed. America with those parts in that unknowne worlde both people and manner of buildings Discribed and inlarged by J.S. Ano. 1626."   Couldn't be real- it had marker lines all over it, but something was nagging at me.  They framed it.  "Why would they bother to frame it" kept wandering through my daily thoughts.  Weeks went by (map still sitting on table).

Internet search.  Found a map guy in California.  Sent him an email describing what I had.  He called me within an hour.  He asked me questions about the map.  He got VERY excited.  I sent him the map for authentication (I trust almost anyone).  Waited about a week.  He called.  It was real.  IT WAS REAL.  I bought a more than 350 year old map at a house sale for $2.  I was quite pleased with myself and believe you me, Andrew Henry heard about it.  I believe the daughter was on his doubting Thomas team as well.

The map expert wanted to buy it.  He explained it had to be restored.  He gets this done in Europe.  This would cost him quite a bit, blah blah.  He would give me half what he expected to sell it for.  Then, the worst thing happened.  The thing Andrew Henry and I kick ourselves over.  Even now as we're reminded of it, we feel we should be shot.  Tarred, feathered, possibly quartered or submitted to hours of Chinese water torture.  At the very least, not be allowed to ever eat Nutella again!

We sold him the darn map for about $2,500.  At the time, the money sounded good.  Yes, with private school tuition it sounded good, but not now.  NOW, having that old map hanging in Pagoda, sounds better.  Ah well, live and learn - plus the daughter's education is worth any old map - even if she doesn't make her bed when she comes home to visit.

It's a good story to pull out at a party right?  I'm glad we photographed it before we sent it to that guy in California (think his name was Barry).  I like to imagine how it came to live in that dusty corner in a barn in Phoenix.  How many people have touched it over these 350 years?  Where is it now?

Holy crap! I can't belive you trusted that guy. Obviously you're not from NY. Good to know he was honest. I would have sold it too and kicked myself later. Your daughter is obviously reaping the rewards of the private education. Law School if I remember from past posts. Good investment. Lucky girl.

WOW! We over here are all history buffs and by association are also map lovers as well. Wish I knew what the attraction is - but even my two little ones LOVE to pour over maps with us. I would have done exactly the same - priorities of the here and now and all. I'll bet you could find Barry and ask him whatever became of it - he MIGHT tell you.

Seriously. I thought there would be another purse today, way better. Way WAY better, and I like purses. Just such a cool story. Too bad you couldn't take that to Antiques Roadshow, they would have featured you for sure!!!!

Really cool. Just really cool story. I'm going to be telling this at cocktails this evening. I might change it to MY map story, just kidding (depending on how many I've had before I tell the story)!

What a cool find, just what we 'antique seekers' look for.

We call it our 'Antiques Roadshow Moment'.

After our map was gone, I saw some similar maps on 'The Roadshow'. They were about the same age but by a different cartographer. The estimated value they gave was in line with what ours was worth at the time so it made me feel a little better.

There was something really neat about holding a piece of paper that was printed when so little was known about the western US.

Oh! what a wonderful 'find', I bet maps get more than a second look these days.

Oh! what a wonderful find, and you didn't even need a map to get there:) In all of my years of foraging and hoping I can't say I have ever come across anything to match this one. Thanks for sharing that with us.

Oh. My. Gosh. This is just like the stories they tell on Antiques Roadshow! I've always got my eyes peeled for something valuable at flea markets and thrift stores. Love this. LOVE it!!

Okay, here's a little tidbit for all you commentors - you've been mentioning Antiques Roadshow - well, I was on AR Monday night! I was in line in the background while they were doing their little thing about this yarn holder. They came to Phoenix last year and my mother and I got to go. It was great fun!

i tell that story often. love good finds and that takes the cake. i think it is great you had a buyer when you did. people hang on to things they may never sell because they feel it is worth more. my husband always says it is only worth that much if you have a buyer with cash willing to pay for it. i told my neighbor that her book on DURAN DURAN was worth over $100 (same author as CORALINE) and she found out it was actually worth $200. SELL IT!
pdc